To begin with: the origamis which we study are not really results of the beautiful Japanese folding art. Though we are also working with squared pieces of paper, we don't fold them, but glue them together.

In fact, our origamis are mathematical objects which are constructed by some simple rules from a few combinatorial data. However, they define interesting and rich objects in differerent mathematical areas as algebraic geometry, geometric group theory and dynamical systems.

Since summer 2007 we have the research project With origamis to Teichmüller curves in moduli space which is funded by the Landesstiftung Baden-Württemberg.

A brief description of origamis

Imagine you are given finitely many copies of the Euclidean unit square. Glue them according to the following rules:

An origami O is a collection of glueing data satisfying these rules. The resulting surface X is tesselated by squares and naturally carries a translation structure. It is therefore often called square tiled surface.
There are several equivalent descriptions of origamis, e.g. as coverings of a torus ramified at most over one point, as pairs of permutations in

Here g is the genus of the origami-surface X, and n is the number of vertices of the tesselation by squares on the surface.

You can find a list of publications on origamis and square tiled surfaces here.


People in Karlsruhe working on origamis

Since summer 2007, there furthermore is the research project With origamis to Teichmüller curves in moduli space funded by the Eliteprogramm für Postdoktorandinnen und Postdoktoranden der Landesstiftung Baden-Württemberg.

This software was pogramed by Karsten Kremer and Gabriela Schmithüsen . Please send us an email (to origami@mathematik.uni-karlsruhe.de) if you have questions. The software is free under the GNU General Public License (see below). If you publish results you obtained by using it, please don't forget to give appropriate credit in your publication. If you program more algorithms using this package, we kindly ask you to let us know. 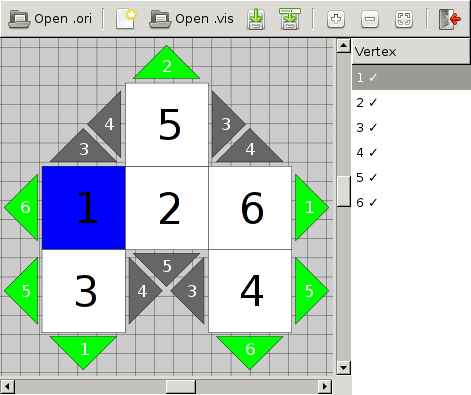 In addition to the above library we have developed a graphical application that allows you to interactively lay out an origami for inclusion in a publication, using the

-support mentioned above. It is implemented using Python and PyGTK.

Both software packages are distributed under the conditions of the GNU Public License, version 3:

This program is free software; you can redistribute it and/or modify it under the terms of the GNU General Public License as published by the Free Software Foundation; either version 3 of the License, or (at your option) any later version.

This program is distributed in the hope that it will be useful, but WITHOUT ANY WARRANTY; without even the implied warranty of MERCHANTABILITY or FITNESS FOR A PARTICULAR PURPOSE. See the GNU General Public License for more details.

You should have received a copy of the GNU General Public License along with this program; if not, see http://www.gnu.org/licenses/ or write to the Free Software Foundation, Inc., 51 Franklin Street, Fifth Floor, Boston, MA 02110-1301, USA.