Geometry of PDE's and related problems

The contributions to this summer school were published.

In 2011 the summer school took place in Bydgoszcz/Polen from September 4-18.

In 2012 the summer school took place in Freudenstadt from September 9-23.

At the summer school in Bydgoszcz, Professor Roman Ger spoke about convexity as follows:

"Convexity is a beautiful lady -- and I am a silent admirer of her".

In full accordance with his statement, I drew the following sketch on the black board at the beginning of my lecture series on "Calculus of Variations and Applications to Elasticity":

"Convexity is truly a beautiful lady -- but do you also know her beautiful sisters?"

It found its way into Macierzator 40 published by the mathematics students at the Silesian University in Katowice, whom I cordially thank for that. 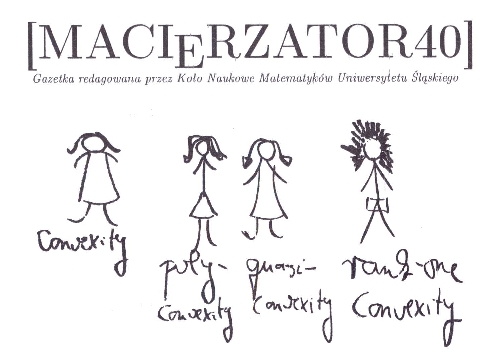