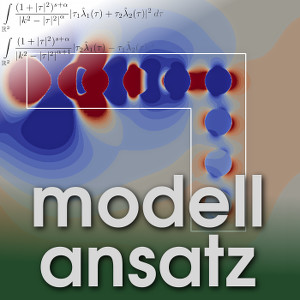 Nanophotonics is one great path into our future since it renders possible to build e.g. absorber, emitter or amplifier on a scale of a few dozen nanometers. To use this effectively we will have to understand firstly the resonances of plasmons and secondly the interaction of electromagnetic waves with complex media. Here on the one hand we can model light as waves and describe what is happening for the different frequencies of monochromatic light waves. We have to model the evolution in air or in more complex media.
On the other hand - taking the more particle centered point of view - we can try to model the reaction of the photons to certain stimuli.

The modelling is still in progress and explored in many different ways.

The main focus of our guest Claire Scheid who is working on nanophotonics is to solve the corresponding partial differential equations numerically. It is challenging that the nanoscale-photons have to be visible in a discretization for a macro domain. So one needs special ideas to have a geometrical description for changing properties of the material. Even on the fastest available computers it is still the bottleneck to make these computations fast and precise enough.

A special property which has to be reflected in the model is the delay in response of a photon to incoming light waves - also depending on the frequency of the light (which is connected to its velocity- also known as dispersion). So an equation for the the evolution of the electron polarization must be added to the standard model (which is the Maxwell system).

One can say that the model for the permeability has to take into account the whole history of the process. Mathematically this is done through a convolution operator in the equation. There is also the possibility to explain the same phenomenon in the frequency space as well.

In general the work in this field is possible only in good cooperation and interdisciplinary interaction with physicists - which also makes it especially interesting.

Since 2009 Claire Scheid works at INRIA méditerranée in Sophia-Antipolis as part of the Nachos-Team and is teaching at the university of Nice as a member of the Laboratoire Dieudonné.

She did her studies at the Ecole Normale Superieure in Lyon and later in Paris VI (Université Pierre et Marie Curie). For her PhD she changed to Grenoble and spent two years as Postdoc at the university in Oslo (Norway).