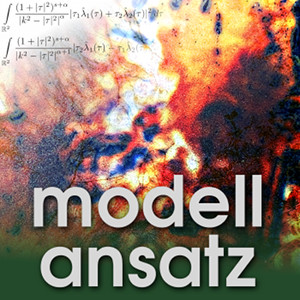 In the coming weeks until February 20, 2020, Anna Hein, student of science communication at KIT, intends to conduct a study on the Modellansatz Podcast within her master's thesis. For this purpose, she would like to conduct some interviews with you, the listeners of the Modellansatz Podcast, to find out who listens to the podcast and how and for what purpose it is used. The interviews will be anonymous and will take about 15 minutes each. To participate in the study, you can register with Anna Hein until 20.2.2020 at studie.modellansatz@web.de . We would be very pleased if many interested parties would contact us.

This is the second of three conversation recorded Conference on mathematics of wave phenomena 23-27 July 2018 in Karlsruhe.

Gudrun is in conversation with Mariana Haragus about Benard-Rayleigh problems. On the one hand this is a much studied model problem in Partial Differential Equations. There it has connections to different fields of research due to the different ways to derive and read the stability properties and to work with nonlinearity. On the other hand it is a model for various applications where we observe an interplay between boyancy and gravity and for pattern formation in general.

An everyday application is the following: If one puts a pan with a layer of oil on the hot oven (in order to heat it up) one observes different flow patterns over time. In the beginning it is easy to see that the oil is at rest and not moving at all. But if one waits long enough the still layer breaks up into small cells which makes it more difficult to see the bottom clearly. This is due to the fact that the oil starts to move in circular patterns in these cells.

For the problem this means that the system has more than one solutions and depending on physical parameters one solution is stable (and observed in real life) while the others are unstable. In our example the temperature difference between bottom and top of the oil gets bigger as the pan is heating up. For a while the viscosity and the weight of the oil keep it still. But if the temperature difference is too big it is easier to redistribute the different temperature levels with the help of convection of the oil.

The question for engineers as well as mathematicians is to find the point where these convection cells evolve in theory in order to keep processes on either side of this switch. In theory (not for real oil because it would start to burn) for even bigger temperature differences the original cells would break up into even smaller cells to make the exchange of energy faster.

In 1903 Benard did experiments similar to the one described in the conversation which fascinated a lot of his colleagues at the time. The equations where derived a bit later and already in 1916 Lord Rayleigh found the 'switch', which nowadays is called the critical Rayleigh number. Its size depends on the thickness of the configuration, the viscositiy of the fluid, the gravity force and the temperature difference.

Only in the 1980th it became clear that Benards' experiments and Rayleigh's analysis did not really cover the same problem since in the experiment the upper boundary is a free boundary to the surrounding air while Rayleigh considered fixed boundaries. And this changes the size of the critical Rayleigh number. For each person doing experiments it is also an observation that the shape of the container with small perturbations in the ideal shape changes the convection patterns.

Maria does study the dynamics of nonlinear waves and patterns. This means she is interested in understanding processes which change over time. Her main questions are:

It is possible to investigate waterwave problems which are dispersive equations as well as flow problems which are dissipative. Together with her colleagues in Besancon she is also very keen to match experiments for optical waves with her mathematical analysis. There Mariana is working with a variant of the Nonlinear Schrödinger equation called Lugiato-Lefever Equation. It has many different solutions, e.g. periodic solutions and solitons.

Since 2002 Mariana has been Professor in Besancon (University of Franche-Comté, France). Before that she studied and worked in a lot of different places, namely in Bordeaux, Stuttgart, Bucharest, Nice, and Timisoara.