On closer inspection, we find science and especially mathematics throughout our everyday life, from the tap to automatic speed regulation on motorways, in medical technology or on our mobile phone. What the researchers, graduates and academic teachers in Karlsruhe puzzle about, you experience firsthand in our Modellansatz Podcast: "The modeling approach“. 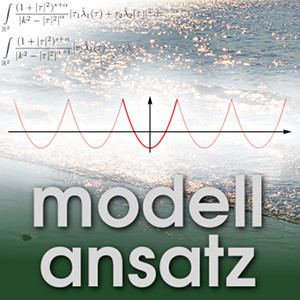 Gudrun talks to Anna Geyer. Anna is Assistant professer at TU Delft in the Mathematical Physics group at the Delft Institute of Applied Mathematics. She is interested in the behaviour of solutions to equations which model shallow water waves.

The day before (04.07.2019) Anna gave a talk at the Kick-off meeting for the second funding period of the CRC Wave phenomena at the mathematics faculty in Karlsruhe, where she discussed instability of peaked periodic waves. Therefore, Gudrun asks her about the different models for waves, the meaning of stability and instability, and the mathematical tools used in her field.

For shallow water flows the solitary waves are especially fascinating and interesting. Traveling waves are solutions of the form

representing waves of permanent shape f that propagate at constant speed c. These waves are called solitary waves if they are localized disturbances, that is, if the wave profile f decays at infinity. If the solitary waves retain their shape and speed after interacting with other waves of the same type, we say that the solitary waves are solitons. One can ask the question if a given model equation (sometimes depending on parameters in the equation or the size of the initial conditions) allows for solitary or periodic traveling waves, and secondly whether these waves are stable or unstable. Peaked periodic waves are an interesting phenomenon because at the wave crest (the peak) they are not smooth, a situation which might lead to wave breaking. For which equations are peaked waves solutions? And how stable are they?

Anna answers these questions for the reduced Ostrovsky equation, which serves as model for weakly nonlinear surface and internal waves in a rotating ocean. The reduced Ostrovsky equation is a modification of the Korteweg-de Vries equation, for which the usual linear dispersive term with a third-order derivative is replaced by a linear nonlocal integral term, representing the effect of background rotation. Peaked periodic waves of this equation are known to exist since the late 1970's. Anna presented recent results in which she answers the long standing open question whether these solutions are stable. In particular, she proved linear instability of the peaked periodic waves using semi-group theory and energy estimates. Moreover, she showed that the peaked wave is unique and that the equation does not admit Hölder continuous solutions, which implies that the reduced Ostrovsky equation does not admit cusps. Finally, it turns out that the peaked wave is also spectrally unstable. This is joint work with Dmitry Pelinovsky.

For the stability analysis it is really delicate how to choose the right spaces such that their norms measure the behaviour of the solution. The Camassa-Holm equation allows for solutions with peaks which are stable with respect to certain perturbations and unstable with respect to others, and can model breaking waves.

Anna studied mathematics in Vienna. Adrian Constantin attracted her to the topic of partial differential equations applied to water waves. She worked with him during her PhD which she finished in 2013. Then she worked as Postdoc at the Universitat Autònoma de Barcelona and in Vienna before she accepted a tenure track position in Delft in 2017.