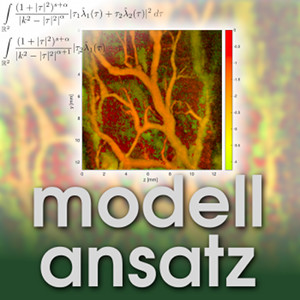 In March 2018 Gudrun had a day available in London when travelling back from the FENICS workshop in Oxford. She contacted a few people working in mathematics at the University College London (ULC) and asked for their time in order to talk about their research. In the end she brought back three episodes for the podcast. This is the second of these conversations.

Gudrun talks to Marta Betcke. Marta is associate professor at the UCL Department of Computer Science, member of Centre for Inverse Problems and Centre for Medical Image Computing. She has been in London since 2009. Before that she was a postdoc in the Department of Mathematics at the University of Manchester working on novel X-ray CT scanners for airport baggage screening.

This was her entrance into Photoacoustic tomography (PAT), the topic Gudrun and Marta talk about at length in the episode. PAT is a way to see inside objects without destroying them. It makes images of body interiors. There the contrast is due to optical absorption, while the information is carried to the surface of the tissue by ultrasound. This is like measuring the sound of thunder after lightning. Measurements together with mathematics provide ideas about the inside. The technique combines the best of light and sound since good contrast from optical part - though with low resolution - while ultrasound has good resolution but poor contrast (since not enough absorption is going on).

In PAT, the measurements are recorded at the surface of the tissue by an array of ultrasound sensors. Each of that only detects the field over a small volume of space, and the measurement continues only for a finite time. In order to form a PAT image, it is necessary to solve an inverse initial value problem by inferring an initial acoustic pressure distribution from measured acoustic time series. In many practical imaging scenarios it is not possible to obtain the full data, or the data may be sub-sampled for faster data acquisition. Then numerical models of wave propagation can be used within the variational image reconstruction framework to find a regularized least-squares solution of an optimization problem.

Assuming homogeneous acoustic properties and the absence of acoustic absorption the measured time series can be related to the initial pressure distribution via the spherical mean Radon transform. Integral geometry can be used to derive direct, explicit inversion formulae for certain sensor geometries, such as e.g. spherical arrays.

At the moment PAT is predominantly used in preclinical setting, to image tomours and vasculature in small animals. Breast imaging, endoscopic fetus imaging as well as monitoring of perfusion and drug metabolism are subject of intensive ongoing research.

The forward problem is related to the absorption of the light and modeled by the wave equation assuming instanteneous absorption and the resulting thearmal expansion. In our case, an optical ultrasound sensor records acoustic waves over time, i.e. providing time series with desired spacial and temporal resolution. Given complete data, then one can mathematically reverse the time direction and find out the original object.

Often it is not possible to collect a complete data due to e.g. single sided access to the object as in breast imaging or underlying dynamics happening on a faster rate than one can collect data. In such situations one can formulate the problem in variational framework using regularisation to compensate for the missing data.

In particular in subsampling scenario, one would like to use raytracing methods as they scale linearly with the number of sensors. Marta's group is developing flexible acoustic solvers based on ray tracing discretisation of the Green's formulas. They cannot handle reflections but it is approximately correct to assume this to be true as the soundspeed variation is soft tissue is subtle. These solvers can be deployed alongside with stochastic iterative solvers for efficient solution of the variational formulation.

Marta went to school in Poland. She finished her education there in a very selected school and loved math due to a great math teacher (which was also her aunt). She decidede to study Computer Sciences, since there she saw more chances on the job market. When moving to Germany her degree was not accepted, so she had to enrol again. This time for Computer Sciences and Engineering at the Hamburg University of Technology. After that she worked on her PhD in the small group of Heinrich Voss there. She had good computing skills and fit in very well. When she finished there she was married and had to solve a two body problem, which brought the couple to Manchester, where a double position was offered.
Now both have a permanent position in London.